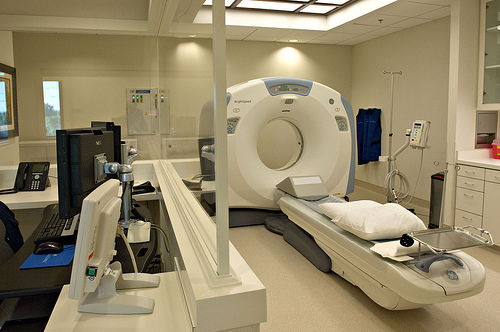 Biophysicist David Brenner was in his 40s when an older colleague in New York City, a prominent pediatric radiologist, mentioned in conversation something Brenner couldn’t shake: Far too many children, the pediatrician felt, were getting computed tomograph (CT) scans for ailments, such as suspected appendicitis, that used to be diagnosed easily by ultrasound or even observation. Cells in children, already more vulnerable because they divide faster than those of adults, have more time to turn cancerous after the initial damage from radiation. And a single CT scan delivers a lot of it, the equivalent of dozens to a few hundred chest x-rays. A concern about the CT boom, planted 11 years ago, began to grow…

Brenner’s concerns caused a controversy among radiologists, medical physicists, doctors, and the general public, even as the use of CT scans was booming. I investigated the issue in a feature story for Science magazine.

[Image by 1weezie23 via Wikimedia Commons]